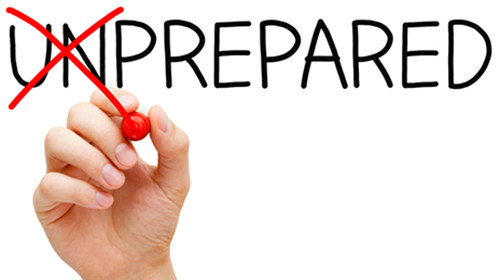 Are You Prepared for Disaster?

Preparing for a disaster is probably fairly low on most peoples’ list. It’s not much fun to do or think about for many of us. Still, there are quite a few people who consider themselves ready for anything, from a natural disaster to a man-made one. A recent study conducted by Persuadable Research has shown that 49% claim they are ready for a disaster.

What items do people appear to have on hand? Items gathered included everything from candles to garbage bags, bleach, batteries, food, water and cash. In fact, some appear to have enough of these items to last more than a month. Most, however, believe that it was important to have enough to last for at least more than a week. This matches the amount of time that most people think it would take for the government to respond to most disaster situations.

Previous experience with a disaster appeared to be a strong motivator for many. Other motivating factors include wanting to protect and care for family members such as a spouse or children. Nearly one out of five were afraid of what would happen if a disaster occurred, which encouraged them to prepare.

Why are nearly half unprepared? Most pointed toward a lack of time and money. Yet, others just seemed disinterested; about 20% intended to just “wing it” if something goes wrong. Others said they just hadn’t given disaster preparedness much thought.

Being prepared may not be top of mind for many Americans. The types and frequencies of disasters might also be a factor. Tornadoes, extreme heat or cold, fires and floods topped the list. Perhaps, those who are not prepared have not actually had enough negative personal experiences with disaster to inspire them.