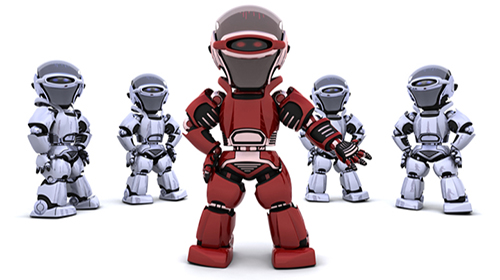 Will Robots Take Over the World?

We’ve all seen the movies where robots take over the Earth and humans come together in rag tag factions to fight off the new cold steel heartless overlords. But, do people really fear robots? The answer is yes, some do, according to a January 2012 Persuadable Research Robot Survey. It appears that 10% are frightened by robots. A full 24% believe that they could take over the world someday.

If one thinks about it carefully, robots can only be as safe as humans program them to be. Add in artificial intelligence and a Pandora’s Box might just might be opened. For all of the potential benefits of having robots, there are as many potential liabilities.

The majority of respondents, 73%, felt that humans might become lazy. However, a smaller percentage, 29%, thought robots would be a bad influence on children. Some just thought they would make life more complicated. Even so, 58% of panelists believed that robots would be commonplace in future society.

Among those who didn’t like the idea of robots “hanging around”, it was clear that there was a real level of discomfort when asking about specific interactions. The highest discomfort level, 42%, was recorded when respondents admitted that they would hate the idea of robots making decisions about things. Talking with a robot would make 20% feel paranoid.

There weren’t high hopes for robot intelligence either. One third didn’t think there would ever be robots with super human intelligence. Another 22% couldn’t imagine them producing Nobel prize quality work, and 20% believed that they would never be able to carry on a conversation well enough to pass as a human. On the other hand, 66% thought that robots would be able to solve problems as well as a third grader.

When it comes to actually purchasing a robot, it seems that 29% of those surveyed wouldn’t be interested. Some respondents believed that robots would intrude on their privacy. Perhaps others could not justify owning one, or thought they would be too expensive. Regardless of how people feel, only time will tell whether or not robots will remain the stuff of science fiction.